‘Perpetual nexus’ is the second solo exhibition by Leonardo Ulian at The Flat -Massimo Carasi in Milan.
In his sculptural works, Ulian explores the relationship between technological objects and the immaterial, with a new series of works and a large site-specific installation.
By depriving the electronic components of their original meaning they become ephemeral objects, and in doing so Ulian wants to pose questions on our relationship with the contemporaneity and the constant rising of the new technological hopes almost comparable to new forms of technological spirituality.
The exhibition is characterized by a large installation called TM 141 Perpetual nexus, in which the central part is made with various electronic elements soldered together that grow outwardly to colored pieces of perspex all connected with brass wires.
The appearance of the installation is that of a geometric and sacred theme of a cathedral window that becomes, in artist’s intentions, a contemporary sacred object to be worshiped.
Ulian likes to activate the Technological Mandalas with ephemeral powers that go behind the actual nature of the materials they
made of.
Interestingly, the most common question people ask Ulian about the nature of the Technological mandalas is: “do they do something?”, this because they look like the electronic circuits, and he likes to say: “yes, they are supposed to trigger minds with thoughts, images, connections and so on”, as the traditional electric circuits do, but in Ulian case they work on a different level of consciousness.
There is an inner desire for the artist to make sense of the everyday things and concepts that sometimes are difficult to grasp, as the ‘contemporaneity’ for instance.
Ulian says: “As Will E. Coyote the cartoon character, it is always trying to catch the roadrunner by creating utopian beautiful machines, but sadly, this never happens, the plan goes always wrong, but it tirelessly keeps on its mission.”
The ‘Contemporaneity’ is as the Roadrunner, when you are close enough to grasp its meaning, it quickly disappears in a cloud of smoke…
The theme of impermanence is also dear to Ulian, theme that also occurs in the Mandalas made of sand in the Buddhist tradition, but at the contrary, artist’s technological mandalas are not swept away at the end of their making process, but rather are well fixed almost to become a sort of fetish reminder.
Ulian’s working process is, in a way, comparable to that of a mad machine programmed to find a solution to a problem, that will actually never be solved.
By compulsively connecting different objects Ulian’s practice rises possible questions on meaning and relationship among objects and concepts we attribute to them, and to do so he creates his own web of connections where the possibilities are infinite. Similarly to the internet, even if a point is broken within the complexity, another path can be tracked and rediscovered, and a new possible meaning and connection are found. 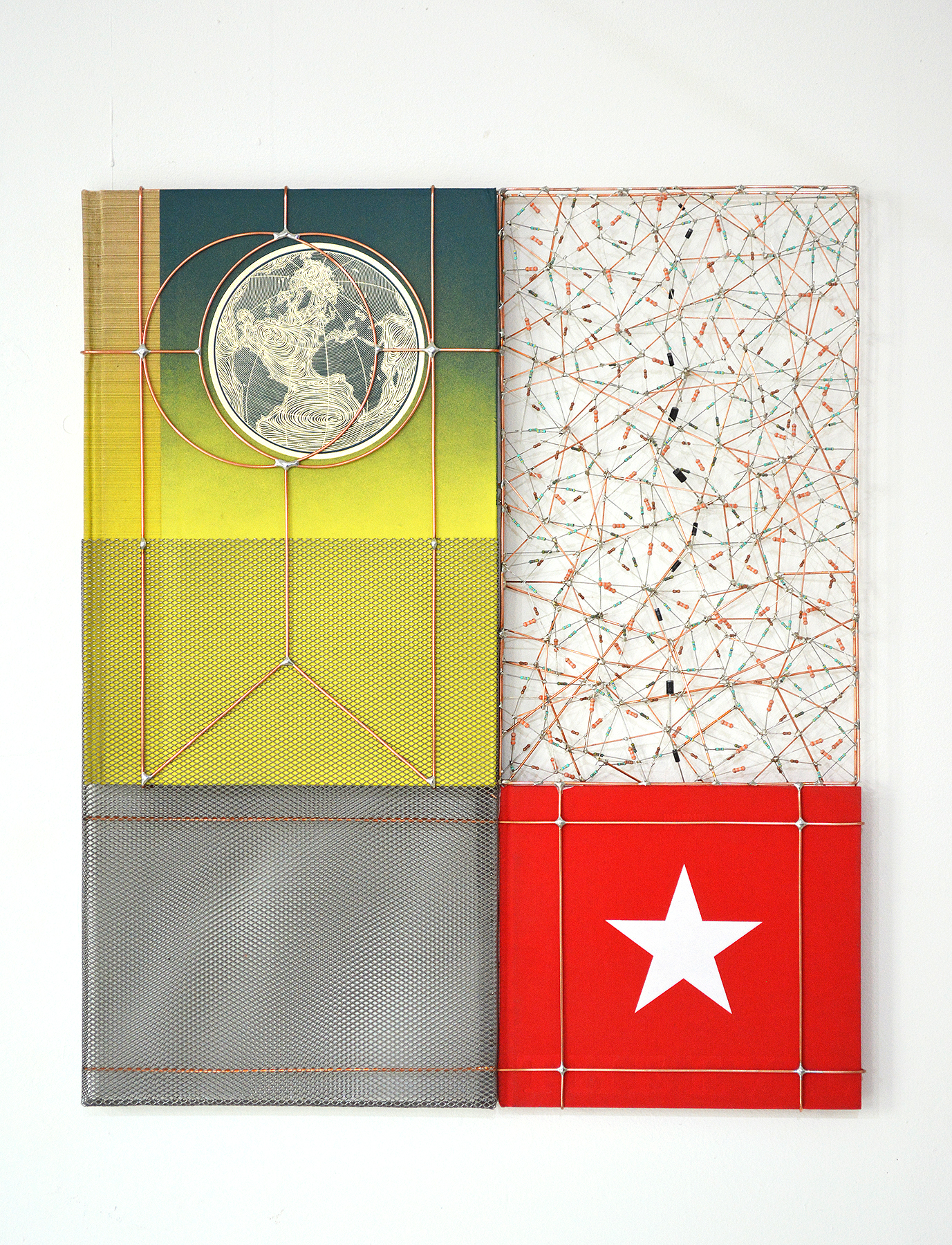